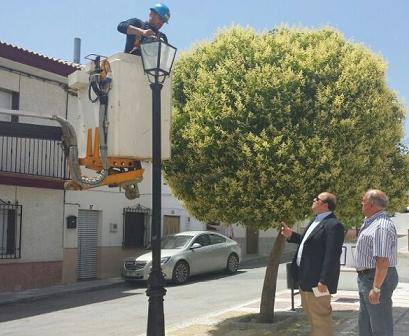 The RenovAL III project is the third phase of the Granada Provincial Council’s 1386 agreement programme to improve the energy efficiency of public lighting in Granada’s municipalities that request it.

From the Department of Environment, Economy, Family and Social Welfare, the Provincial Council of Granada is going to undertake the third phase of a comprehensive plan to replace public lighting equipment with more efficient ones through the Provincial Energy Agency, based on the results obtained in the different phases of Energy Audits (AUDGRA) previously carried out in the municipalities of Granada.

Public lighting can account for 40-50% of a municipality’s energy consumption, so it is necessary to define some of the most efficient technologies available in the sector and some measures that can be applied to reduce consumption, such as changing the lamps that can be used to save energy and money.

This type of action fits in perfectly with the results offered by researchers at the Complutense University, who have measured the light emitted by towns and cities at night to assess lighting consumption in Spain. Members of the Department of Astrophysics and Atmospheric Sciences at the Complutense University of Madrid (UCM) have managed to measure the light emitted by cities at night and relate it to their public lighting consumption during the period 1992 to 2012. As a conclusion, the researchers estimate that the consumption per inhabitant in 2012 was 113 kWh, much higher than the objective of the Energy Efficiency Plan 2004-2012 (75 kWh inhabitant). The researchers recommend adapting the power of Spanish streetlights to European power standards and reducing the upward and horizontal emission of streetlights, which is not only wasteful but also increases light pollution. They also suggest, as far as possible, avoiding white light sources for outdoor public lighting, which have a more harmful effect on the environment and human health.

The contract has already been awarded to the company PRODIEL, which is already carrying out the work..

Sustainability policies related to renewable energies, energy saving and efficiency have become a concern shared by most localities, especially in Europe, which aim to raise public awareness of the importance of adopting measures that respond to the challenge posed by urban development. They are therefore committed to the use of more efficient equipment from an energy, environmental and economic perspective.

In this line, the Diputación de Granada and 42 town councils in the province, through the process of municipal agreements, have set as a priority, among others, the installation of more efficient lamps and lighting equipment in lighting. In this specific case, the aim is to supply sodium vapour lamps (or metal halide lamps) together with their auxiliary control gear.

If we talk about the general figures of the programme, it will involve a total investment of 329,040 € (25% municipalities, 25% Provincial Council, 50% Andalusian Energy Agency with FEDER funds) acting in 42 municipalities in the province, allowing a saving of 438 tons of CO2 emissions and an economic saving of 253,360.80 €, so that in just over a year the total investment is amortised, with the savings being available to the municipalities from the 4th month onwards.

This action is currently being carried out in the following municipalities that requested their inclusion in the programme at the time: